Yesterday, Nick and I headed over to NextFab for out plasma cutting practice session. We had taken their Metal Fabrication I class a few weeks ago and with the holidays happening didn’t get time to take advantage of the free practice hour until now.

We were given a square foot size piece of steel to do as we wish with. They recommend building some book shelf supports because it is pretty straight forward and you can use all the different tools besides the plasma cutter that we were taught to use, like the metal worker, and the grinders.

Nick and I both decided to make two sets of smaller brackets, instead of one set of huge brackets. That left us some extra steel to play with too. Cutting them with the hand plasma cutter is pretty difficult for a number of reasons including plain old dexterity, so as you can imagine they aren’t the prettiest things.

I will say that from the class a few weeks ago when I didn’t even know what a plasma cutter was, until yesterday, I got a lot better. With more practice the sky is the limit, in terms of cutting metal anyway.

Once our peices were cut, they were still real rough, so we had to try to clean them up a bit using the grinder. Not just for aesthetics either, we were told that atmospheric contamanents get in to the steel when it’s being cut and that this will make the future welding process much more difficult if it’s left.

I was confused about what a plasma cutter is so here’s a quick break down:

Plasma cutters use an arc created from the tip of the tool to the metal it is cutting to heat up an inert gas until it becomes plasma and has enough energy to slice through the metal. Thus it can only be used on an electrically conductive material, i.e. metal. There’s a more in depth description here.

There are two main types, the hand cutter and the CNC. The CNC is basically a robot that takes an image as input and cuts it out accurately on a flat piece of metal. It’s much cleaner and is how things such as these signs are made.

It uses a tip that is attached to two arms that can let it move in two dimensions and then it just traces the image out onto the material and cuts it as it goes.

Hand plasma cutters are like a big stick with a hose hanging out of one end and a tip you have to either hover or drag across to make the cut. In doing this you have to deal with the unwieldy hose, you have to try and keep it perpendicular to the metal, and you have to try to see the line you want to cut amidst a lot of sparks. Also, depending on the type of tip on the cutter you either have to work out how smoothly you can drag it across your metal or you have to worry about the distance you are maintaining from the metal to keep the torch going. Obviously this is much less accurate, but I did come across some nice artwork using this method by Cal Lane like this cut up steel drum to look like a map. 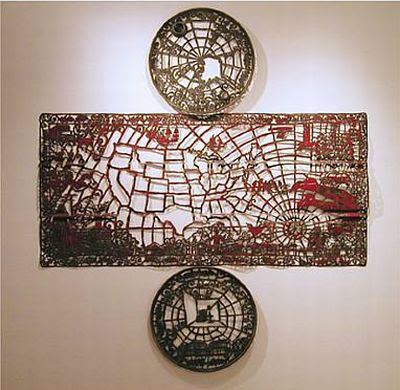